Social Norms and Stereotypes: What Happens When Everyone's a Little Bit Sexist?

Upon seeing one of those “reuse your towel” cards in a hotel, have you ever wondered how many people were actually reusing their towels? An experimental study found that when the message was supplemented with information that “nearly 75 percent of hotel guests reuse their towels,” the guests receiving the message became more likely to reuse their towel than the guests who got the standard note. This is an example of the power of social norms – when the desired action is perceived as the norm, compliance increases. The same mechanism is at work in reverse for an undesirable behavior – people are less likely to litter when they perceive that only a few “anti-social types” litter. 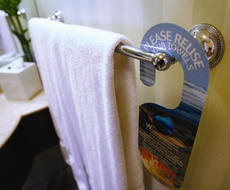 Social norms are often more powerful than explicit messages. The signs in the Petrified Forest National Park used to read something like this: “Don’t take petrified wood, 14 tons a year are being stolen in small pieces.” That last part essentially signaled to the visitor: “everybody is doing it.” When that part was removed, compliance improved.

Now, let’s connect this information to racial and gender stereotyping and bias – generally, people view bias as undesirable and actively work against it. However, the 2000’s saw a growing body of research on unconscious biases. The notion that most people have unconscious stereotypes and biases captivated the popular press. The cover of the Washington Post Magazine on January 23, 2005 read: “Many Americans believe they are not prejudiced. Now a new test provides powerful evidence that a majority of us really are.” So, it’s like the song from Broadway musical Avenue Q, “Everyone's a Little Bit Racist.”

But what does that mean for social norms? Does knowing that everyone has unconscious biases make it seem permissible to let our own biases slide?

Those are the questions Melissa Thomas-Hunt, Associate Professor of Business Administration at the University of Virginia Darden School of Business, set out to answer with her colleague Michelle Duguid, Assistant Professor of Organizational Behavior at the Washington University in St. Louis Olin Business School. Thomas-Hunt and Duguid designed a series of creative experiments to test how messages of high and low prevalence of stereotyping affect behavior.

In one of the experiments, pairs of women and men were negotiating a car sale. All of the men were told to avoid thinking of others in a stereotypical manner. Some of the men were primed with a “high prevalence of stereotyping” message – they were not told what gender biases might be, just that an influential body of research finds that the majority of people do stereotype. Other men were primed with a “low prevalence” message – that very few people hold stereotypical misconceptions. Yet another set of men received a “high prevalence of counter stereotyping” message – that most people actively try to overcome biased misconceptions.

After the negotiation, the women, who did not know anything about these messages, were asked to rank their opponents' assertiveness. The researchers also compared negotiated price outcomes. The men who were told that most people stereotype, despite being cautioned not to do so themselves, consistently claimed more value in the negotiation and were ranked as more assertive by their female counterparts than were the men in both other groups. The division of value was more equitable in the pairs where men received “few people stereotype” and “most people work to avoid stereotyping.” The men were also perceived to be less assertive by their female counterparts. In other words, the men who perceived the social norm to be in line with stereotypes of women as weak negotiators were more likely to treat them as such, while the men who thought the social norm was to counter stereotypes treated their negotiating partners more equitably.

Thomas-Hunt’s and Duguid’s experiments point to the conclusion that it’s not enough to be aware that we have conscious and unconscious biases. We need social norms to counter these biases. We need a culture in which most people work hard not to stereotype. In companies, this could be a consistent internal message from the highest ranks, but in society it will take all of us holding each other accountable and working not to be even a little bit sexist.

Melissa Thomas-Hunt presented at a WAPPP Seminar titled, "Condoning Stereotyping: How Awareness of Stereotyping Prevalence Impacts Stereotype Expression in Negotiations and Beyond," on April 4, 2013.


Anya Malkov is an MPP candidate at the Harvard Kennedy School, a WAPPP Cultural Bridge Fellow, and an alumna of From Harvard Square to the Oval Office.
Posted by Anya Malkov at 9:13 AM