The Unintended Consequences of Diversity & Inclusion Initiatives: Lisa Leslie’s Recent Work & Ideas for Putting her Framework to Use


By Rebecca Temkin and Taimi Itembu


Increasingly, evidence shows that organizational diversity and inclusion initiatives (DIIs) are frequently ineffective, or worse, that they lead to worse diversity and inclusion related outcomes.  For example, data shows that standard sexual harassment training may actually worsen behavior among certain employees, leading to increased rates of harassment following trainings (Dobbin & Kalev, 2017).  Professor Lisa Leslie, a thought leader in organizational diversity, seeks to understand and explain the mechanisms by which organizational DIIs are failing. Recently, she has developed a broad theory to explain the unintended consequences of DIIs.

Leslie notes, that even if leaders have good intentions, implementing diversity and inclusion policies may send signals to other people that lead to unintended consequences. The four signals she talks about that might result from implementation of DIIs are: targets are more likely than non-targets to succeed; targets need help to succeed; the organization values morality; the organization values making progress on diversity goals. We provide examples of each signalling pathway below.

Signal 1 Targets are more likely than non- targets to succeed:
For example if a non-target employee perceived it to be unfair that black employees are more likely to be promoted as a result of the DII, they may resent African-American organizational leaders, which would be a negative spillover effect.

Signal 2 Targets need help to succeed:
This signal may trigger negative stereotypes.  For example, if African-American employees are more likely to ascend to leadership positions based on the DII, this might trigger non-target employees to perceive target employees as threats.

Singal 4 Diversity goal progress is valued:
A DII may signal that the objective is to look good, rather than to improve in diversity and inclusion.  This may translate into “for show” behaviors that do little to increase workplace diversity, which is false progress.

Each of these signals might act through multiple psychological or behavioral pathways, leading to multiple responses and consequences (Figure 2).  Further, the type of DII implemented likely impacts the signals sent or received.  For example, resource-based policies, which typically provide more concrete and practical interventions, such as  mentoring programs for target groups, often signal that target groups are most likely to succeed or that the targets are in need of help. Non-discrimination policies sometimes referred to as “identity-blind” practices, seek to ensure that hiring and promotions are based on skills and qualifications and not on demographics. Non-discrimination policies send a strong signal that morality is valued. Accountability initiatives create mechanisms that assign responsibility for and monitor diversity outcomes, and often signal that meeting DII goals is the organization’s focus, rather than improving diversity itself, making these initiatives more likely to lead to false progress. 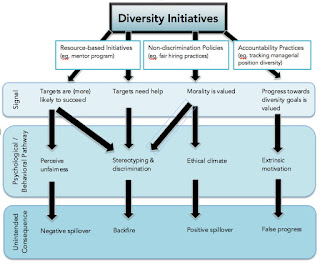 The identities of organizational leaders implementing DIIs and other setting-specific characteristics are likely to impact the signals at play, and therefore the potential unintended consequences of any given DII.  Leslie acknowledges this, and indicated, much the way Iris Bohnet did when asked how to anticipate what instruments will be most effective for de-biasing organizational systems and procedures (Bohnet, 2019), that every setting is extremely nuanced and must be assessed individually.

The desire for a more nuanced theory or framework speaks to a tension common to many implementation-focused disciplines and practices.  Namely, there is a paradoxical desire for a framework to be ‘one-size-fits-all’ -- applicable to any case -- and simultaneously detailed and nuanced enough to appropriately address the unique features of each setting in which it is applied.  Unfortunately, such a framework does not exist for organizational diversity, and indeed, may never be possible or appropriate.  However, Leslie’s framework of types and causes of unintended outcomes is a tool that can be used to assess existing and potential DIIs, to anticipate and minimize the undesirable unintended effects, and to maximize the desirable unintended effects.

For organizations seeking to implement DIIs, we urge leaders to anticipate the unintended effects of potential programs, using Leslie’s framework as a guide.  Consider the signals a given policy might send in the specific organizational context - will race, gender, parental status, employees or other characteristics of program leadership impact how your new policies are viewed?  What strategies might you use to mitigate or counteract anticipated negative interpretations of your new policy?  Attitudes, communication, and behaviors from organizational leaders will have tremendous impacts on the success or failure of DIIs, because as Dobbin and Kalev say, “culture is shaped from the top” (Dobbin & Kalev, 2017).

Thus, CEOs and other leaders need to take a strong public stand - they should be the first in line for DII trainings and programs, and should chair the committees tasked with solving organizational challenges. In the U.S. Armed Forces, in response to alarmingly high rates of sexual harassment experienced by women service members, major anti-harassment efforts were implemented, with increased leadership involvement through anti-harassment messaging, regular trainings, and the establishment of formal and informal reporting mechanisms. Women who reported that their commanders supported these measures also reported less harassment, and greater satisfaction with the organisation’s responses to their complaints (Dobbin & Kalev, 2017).

Next, rather than assuming a new initiative will work, Leslie notes that organisations need to implement a holistic approach to evaluation. It is important to measure not only diversity goal progress, but other mechanisms and outcomes, such as ethical climate perception,
employee organizational engagement, and employee behaviors.  Essentially, DII leaders must assess progress in ways that guard against “false progress” effects, and allow for discovery of negative outcomes of the initiative. Leslie’s framework of unintended consequences would be a useful guide in developing an evaluation strategy that measures both intended and unintended consequences of DIIs.

Finally, in developing DIIs, representation is a key piece to the puzzle.  As Dobbin and Kalev explain, “harassment flourishes in organizations where few women hold the ‘core’ jobs. Fixing this is about finding power in numbers, not just in authority and hierarchy” (Dobbin & Kalev, 2017).  As explained by Monica Ramirez, a champion for farmworker, Latina, and immigrant women, and a strong supporter of worker-led movements, we must make space for and pass the mic to those who are underrepresented to tell their own stories and become leaders in change (Ramirez, 2019). Organizations seeking to improve in diversity and inclusivity should consider these points seriously, and ensure that the members of groups they hope to lift up hold meaningful positions within the organization and have opportunities to shape new organizational DIIs.

The impact of any given policy or program will undoubtedly result in heterogeneous effects across different contexts, and while good intentions about increasing diversity and inclusivity are admirable, good intentions are not enough.  With frameworks such as Leslie’s in hand, we now have tools to assess the impacts of those good intentions, and it is time for every organizational leader to ensure that DIIs do not cause more harm than good.
Posted by Amy Magin at 3:26 PM