The Politics of Work - Family Policies in France, Germany, and Japan

The issue of women, mothers, and work has received a lot of attention in recent headlines: which women have the choice to "lean in," try to "have it all," or find some balance that best fits their lives? Just how far can a mother (or father!) lean in when holding a small child without toppling over, and what kind of work policies permit more choice in these matters? 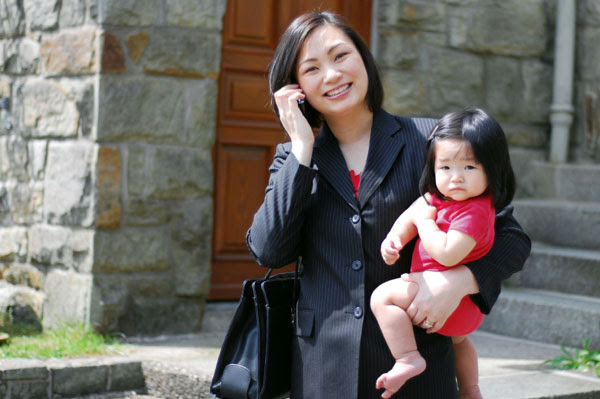 Patricia Boling, Associate Professor of Political Science at Purdue University, dove into these questions as she researched fertility rates, parental leave policies, and child-care options in three different countries. Fertility rates - more easily understood as the average number of children a woman has in her lifetime - are an important driver in adjustments to national work-family policies.  France, Germany, and Japan have all faced low fertility rates. This is not necessarily a state concern about women choosing fewer children; rather, the concern here is usually about the economics of supporting an aging population with a decreasing working-age population.

France tackled the issue of declining fertility rates at the turn of the last century, and its pronatalist policies and outcomes may offer some guidance to nations looking to impact their declining populations. The long-standing French policies that support child rearing include a 3-year long gender neutral paid leave, free public school for toddlers, and tax incentives for additional children. Germany followed suit in 2007 by offering a year of paid leave and an increase in state child-care spaces for 1-year-olds. Japan has been adjusting family policies, known as "Angel Plans," since the 1990s, increasing dual-partner leave time, compensation, and supporting child-care programs.

These all sound great, but just how successful have they been? As Professor Boling points out, national work-family policies matter, but no country is a blank slate. Many factors influence a woman's choice to have children: their culture, the political economy of the labor force, gender wage gaps, and the practical impact parental leave has on career choices. The success of work-family policies is often constrained by these factors as well. Institutional capacities, the tradition of administrative political action, the relationship between national policies and local implementation, and the traditions of businesses as political actors and their relationship with training and expectations from employees also impact how these policies play out.

France has experienced some successes with its policies, though challenges remain with the gender balance of parental leave. The long parental leave offers low pay for the parent who chooses to take it, and there are only 11 days of specified paid paternity leave. As a result, women often take repeated leaves and stay in low-skilled jobs with little chance for advancement. While fathers could conceivably take the longer leave, the incentive structure and labor force economy are such that the "gender neutral" leave is in-name-only.  Germany's adoption of child-care policies has a strong correlation with geography and history: the former East Germany has high rates of toddlers attending child-care, while the West and South have lower rates and a cultural aversion to mothers who do not stay home with their young children. Japan is more challenged by a number of institutional factors. It has the largest "mommy penalty" in the world: the gendered wage gap between women, men, and mothers. Businesses expect loyalty from employees and are hesitant to invest training in women of childbearing age. These same businesses play a major role in political processes, and may limit the success of attempts to adjust practices.

The lessons to be learned about work-family policies are still developing, as nations around the world continue to shape their responses to declining fertility rates. Professor Boling's discussion was a brief insight into a book currently underway. As our own national conversation continues about leaning in, stepping out, having what we can or want, it is worthwhile to keep our eyes open to other nations and their approaches to women, work, and family.


Valerie Kane is an MPP Candidate at the Harvard Kennedy School.
Posted by Unknown at 9:36 AM