I am a lesbian feminist, a proud latina, a social activist, a university professor and, more recently, a Harvard graduate. I am a lot of things, but a politician was not one of them. I care deeply about inequality, I’ve dreamed about achieving equal rights for all in my country, I have fought for it with every bit of energy my soul could muster. I came to Harvard because I felt we were moving too slow on issues that were just too urgent to wait that long. I felt we needed to fight smarter, not harder, to achieve our rights. I needed a bigger lever, and as a social movement advocate, I would have never thought that a political party was the lever I was looking for.


The idea of starting a new political party in Costa Rica was born at WAPPP, at the Oval Office Program, during our friday sessions sitting around that breakfast table, listening to the stories of brave women who had taken a leap of faith in themselves and had run for office, learning the skills and insights needed, talking about our future. G.Reid once said: “A dream written down with a date becomes a goal, a goal broken down into steps becomes a plan and a plan backed by actions makes your dream come true”. Sure enough, as each friday session passed that idea went from being a whisper in the back of my head to a roaring urgency that ran through my veins. I started reaching out to my partners in crime back home. Was this unthinkable? Was I crazy? Nobody seemed to think so, and every phone call was met with excitement, energy and willingness. A spring break visit in March 2016 was our first meeting, a dozen determined individuals decided that we would run for congress in 2018.

We were eager, hopeful and over all committed to do the work needed to build a political party from scratch. Many of us came from social movements and brought with us a horizontal decision-making culture, where ideas are discussed first and potential candidates much, much later. We each started inviting other trustworthy people interested in the issues, and before we knew it our numbers doubled and tripled. The following months we met every weekend to discuss our agenda. We became best friends with google docs and wrote many pages together, detailing our proposals, working in break-out groups, coming together for long sessions, reviewing obsessively every proposal to make sure we knew where we agreed and where we didn’t. We learned a lot from each other those days, and agreed on a broad agenda that included compact sustainable cities, access to ALL human rights, modernization of our criminal and drug policies, better labour opportunities and secularization of the State, as well as a transition towards a parliamentary regime. 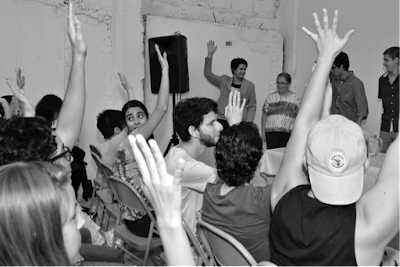 We held our constitutive assembly on September 25th, bringing together 100 enthusiasts that stamped their signatures and elected me as the party president. We planned our official press release for October but our secret was in the wind and we started receiving refugees from several political parties, young people who were disappointed by other initiatives who would always sideline the human rights agenda and felt thrilled that a new political party was in town and willing to call things by their names and open up participation. 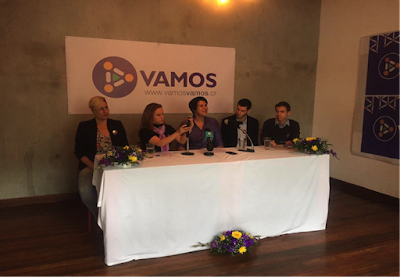 October 19th will remain in my memory as one of the most exciting days of my life. We spent many days preparing our spokespeople and inviting the media. A week before, the story was leaked to one of the major radio newscasters, who woke me at 6:30 am to confirm whether the news were true. The cat was out of the bag and far from deterring media, this just stirred-up even more interest and we had a full house on October 19th. We were covered by several newspapers, radio and television channels during the whole week. Our facebook page exploded and garnered our first one thousand followers in roughly over 24 hours and 100 people signed up as volunteers on our web page.

We decided to call the party VAMOS, because it’s a call to action and our country needs to move. VAMOS means let’s go, and we want Costa Rica to go for full human rights, to go for sustainable cities, to go for a modernized State. Spanish is a beautiful language in which the verb contains the subject that it calls to action. VAMOS is conjugated in plural, because we don’t want to go alone, we want us, all of us to go together, towards the country we dream and deserve. VAMOS!

Posted by Lindsey Shepardson at 1:31 PM