The Woman: Melissa Harris-Perry, Professor of Political Science, Tulane University
The Talk: Sister Citizen: Shame, Stereotypes, and Black Women in America
The Question: What does it feel like to be a black woman in America?

A packed room clucks and hisses at the images on the screen: the lascivious Jezebel, the big-bosomed Mammy, the angry Sapphire, the silent Refugee: stereotypes of black women so ingrained in the American conscience that, Melissa Harris-Perry argues, they limit real womens' access to resources.

“Black women are vulnerable to collective shame because of simply existing in the American political system,” says the author of Sister Citizen. Shame, she argues –- a product of American racism, lingering stereotypes and media bias -- undermines the very essence of a democracy that counts citizens as equals and allows them meaningful recognition.

Sister Citizen, the author's second book, shares the name of Harris-Perry's weekly column for The Nation. It draws on the fields of political science and literature, combining empirical studies with an interior view of women's lives in an attempt to answer one question: What does it feel like to be a black woman in America? 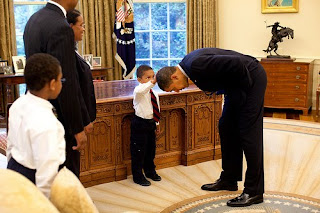 Being limited by a role model mentality that demands greatness (if Obama is president, your children could be too), because the idea "assumes that the primary reason for inequality is that it assumes a lack of imagination of those oppressed. Because if only oppressed children could imagine themselves as president then they could achieve it."** 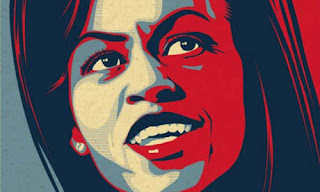 The Nut: Harris-Perry has no easy answers for how to change the stereotypes and help women to become their authentic selves. But public figures such as Michelle Obama have helped to offer alternative realities to the Mammy, the Jezebel, and the Sapphire, even as the trope of the "Strong Black Woman" continues to "terrify and thrill".
*Images courtesy of Jim Crow Museum of Racist Memorabilia (http://www.ferris.edu/jimcrow/jezebel/more/stir.htm), the White House (http://www.flickr.com/photos/whitehouse/3532376714/), The Guardian.
**All italics attributed to Harris-Perry


Effie-Michelle Metallidis is a guest student blogger for the Women and Public Policy Program and Master in Public Policy first-year student at Harvard Kennedy School.
Posted by EMM at 10:11 AM