The Work-Family Narrative and How It's Hurting Women

Gender inequality in the higher echelons of the corporate world has made the news a lot lately – from the UK to Nigeria to Ireland, but the discussion at this week’s WAPPP seminar, "The Work-Family Narrative as a Social Defense: Explaining the Persistence of Gender Inequality in Organizations," focused on the discrepancy in American professional service firms. Despite large gains at the associate level of such organizations, where female employees now comprise roughly half of the workforce, women are severely underrepresented in elite positions. According to the 2013 Catalyst Census, only 15% of C-Suite executives in Fortune 500 companies are women.

Robin Ely, a Professor of Business Administration and Senior Associate Dean at Harvard Business School, presented her research and hypothesis on why such inequality persists. She and her coauthors Irene Padavic and Erin Reid conducted interviews with 107 professionals in a mid-size global consulting firm, where 90% of partners were male. Most employees surveyed said they believed that the inequity was due to the fact that women are disproportionally affected by personal obligations, which can hold them back in a corporate environment where 70-hour weeks are common. 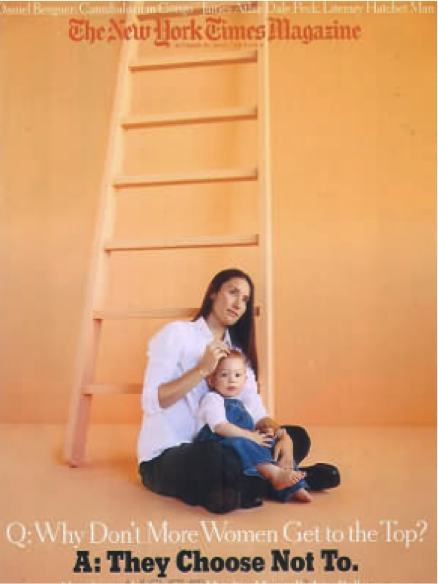 This idea isn’t new; it has been circulated in the news media for over a decade since it was first prominently discussed in a 2003 New York Times Magazine article titled, “Why Don’t More Women Get to the Top? They Choose Not To.”

Professor Ely has an alternative hypothesis, however: that this phenomenon is caused by overselling and over delivery (i.e. overpromising) on the part of partners, paired with associates’ compliance in order to stand out as strong employees.

This creates a 24/7 work culture within elite firms that makes it virtually impossible to balance one’s personal and professional lives, for both men and women. Instead of addressing this culture head on, Ely et al argue that employees use a social defense (a collective arrangement used by an organization to protect against threats and conflicts) to fend off the anxiety this conflict causes.

This social defense splits the professional and personal spheres and then projects the latter onto women. By psychologically assigning women to the private sphere (what Ely calls “privatizing women”), organizations perpetuate the idea that women will prioritize their personal life over their professional one, making them less able to take on management work.

Unfortunately, policy changes may not be enough to resolve this pervasive issue. For example, many elite firms have improved their family leave policies, but women still overwhelmingly use these policies compared to men. Ely argues that a shift in culture is needed, paired with dialogue that references the changes and what they mean for the narrative of the organization.