Liberians go to the Polls

Liberia’s President, Ellen Johnson Sirleaf, a Harvard graduate economist, was the first ever democratically elected female head of state in Africa. Her election at the end of Liberia’s devastating civil wars marked the start of a new era of hope. Affectionately dubbed the “Iron Lady,” President Johnson Sirleaf earned widespread respect for her courageous opposition to previous undemocratic regimes, which even included a stay in jail. Peace activist Leymah Gbowee was at the head of the peace movement largely credited with contributing to the end of Liberia’s bloody civil war. The Nobel Peace Prize honored the two women, along with Yemeni Activist Tawakul Karman, for their non-violent struggle for the safety of women and women’s rights. 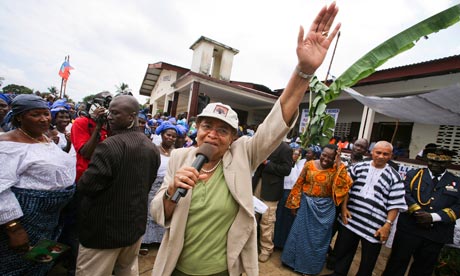 This summer, thanks to the Nancy Germeshausen Klavans Cultural Bridge Fellowship and the Women and Public Policy Program, I had the opportunity to witness first-hand President Sirleaf’s efforts to transition her country from emergency humanitarian aid to development planning. In addition to building from scratch the country’s institutions and convincing the international community of forgiving Liberia’s debt, Sirleaf’s administration has put a renewed focus on women’s plight. Under her administration, women’s political voice was heightened by the establishment of the Women’s Legislative Caucus with membership from both Upper and Lower Houses. The Inheritance Act was passed, establishing rights of inheritance for spouses of both statutory and customary marriages. The gender gap in primary education has almost disappeared in the past six years. And rape, long a weapon of war, is now punishable by a maximum life sentence.

However despite the herculean work that Sirleaf has already accomplished, challenges to Liberian women remain immense. The country’s worst crime problem remains rape and sexual violence against women. The majority of Liberian female workers are still laboring in the unpaid and informal sector, characterized by insecurity and low productivity. In spite of big gains in gender equity in education among youth, adult literacy rates still display a remarkable gap – in rural areas, one-third of women are literate, compared to 60 percent of men.

Sirleaf is up for re-election today. As Liberians go to the polls, one must remember that the single most important determinant of solid democracies is not an election or two, but apeaceful transfer of power from one party to another. On the other hand, with the heavy involvement of UNMIL troops on the ground, and the hands-on international support that the National Elections Commission has been receiving in preparation for the big day, this election is also a test for the international community’s efforts in post-conflict state building. The whole world will be watching, and hoping that Liberia has indeed permanently moved to the peaceful, democratic camp.

****
Hala Hanna is a Masters in Public Policy second year student at the Harvard Kennedy School. She was a WAPPP Cultural Bridge fellow in the summer of 2011 in Liberia.